History of Wine in Southern California

Wine in Southern California has a rich history beginning in the 1700s with the California Mission system. The first set of vines in California were planted at Mission San Juan Capistrano. As the years moved forward, immigrants from Europe began to arrive and established vineyards across the vast region known today as the San Gabriel Valley, Orange County, and the Inland Empire.

Cucamonga, which is known today as the city of Rancho Cucamonga, was an area that was very popular amongst the wine industry. Secondi Guasti, originally from Northern Italy, established the Italian Vineyard Company, which eventually was recognized as a leading wine growing and grape producing enterprise in California. The wine industry flourished, but faced challenges related to Prohibition and the Great Depression, resulting in the closing of many wineries. In the years following, some wineries were able to recover, while others did not.

As time went on, vineyards became far and few in between due to the building of homes and commercial buildings. There are still a few wineries operating today throughout the greater Los Angeles area including the San Antonio Winery, the Galleano Winery, and the Filippi Vintage Company, however the most popular area for wine in southern California today is located one hour north of San Diego in the city of Temecula. 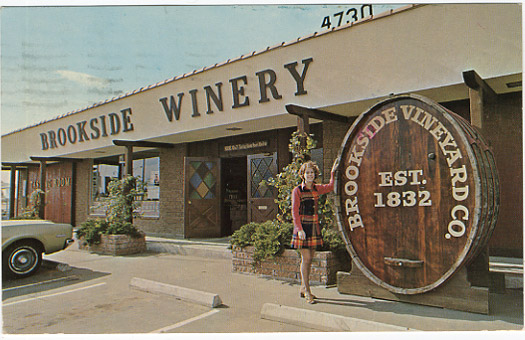 Philo Biane was born at the Brookside Winery in Redlands, California in 1909 and moved to the Cucamonga area in 1916. His French winemaking ancestors came to California in 1832. Mr. Biane, who spent a lifetime in winemaking, had firsthand knowledge of the Italian Vineyard Company and the town of Guasti. He was president of Brookside Vineyard Company when it was located in Guasti, and during his retirement established Rancho de Philo Winery in Alta Loma, which continues to be run by his daughter Janine Tibbets.

The Louis Cherpin Winery opened in 1934 and was founded by Louis Cherpin, who came to California with his wife seeking new

opportunities in 1922.  He first purchased land in Fontana, where he began planting grapes, ultimately leading up to the establishment of the winery which during its popular years sold 21 varieties of wine.  Louis Cherpin and his wife raised four sons and one daughter in their home located near their winery.  Their four sons continued to operate the winery after Louis' death in 1956, but eventually only one son, Eugene, would continue as the winery could no longer support all four brothers and their families.  The winery was no longer in full production in the late 1970s, so Eugene and his wife sold their grapes from their vineyard, operated a store on Sunset Boulevard in Los Angeles, and sold wine to different restaurants.  The winery closed in 1980 after Eugene Cherpin decided to take a job at Heublin, making wine for vinegar at the Regina Winery.

The Cucamonga Winery claimed to be the original one of the district containing the   Cucamonga name. It also contributed a great deal to making the Cucamonga name famous for its table wines, not only in California, but also in the Eastern part of the country. It was mainly owned and operated by the Accomazzo family.

Alfred Accomazzo and his brother Eduardo, natives of San Desiderio in the Asti region of Piedmont, Italy, came to California as young men in 1902. They engaged in various trades in San Francisco and in the Los Angeles area, including running their first Bonded Winery in Glendale, California in 1916. During Prohibition they turned to the real estate business, but after Repeal the Accomazzos became permanently identified with the wine industry.

The Cucamonga Winery was founded in 1933, when Alfred Accomazzo joined forces with several partners (Dominic Merlo,

Mary Pastrone and Louis Gotto) to operate a winery in the heart of Cucamonga. Vineyards were acquired and soon extended. Cucamonga Winery wines were distributed in New York, Connecticut, Massachusetts, Vermont, Illinois and Ohio.

In 1950 Ed Accomazzo (son of Eduardo) began assisting, and eventually managed the winery. Alfred Accomazzo passed away in 1960, but his son, Arthur continued the family tradition. Sam Kurland was also prominent in the firm.

Acreage included 700-850 acres of vineyards spread throughout the Cucamonga Valley. Cucamonga Winery also had vineyards in the North Coast Counties. Ed Accomazzo served on the Board of Directors of the San Gabriel Valley Labor Association during the active years of the Bracero program in the 1950s, and as a director for the Wine Institute during the late 1950s to mid-1970s. Because of escalating taxes,most area vineyard owners were eventually forced to sell their land. The Cucamonga Winery closed in 1975. In his retirement, Ed Accomazzo was in charge of the Cucamonga Vintners in Upland, California.

Outstanding Cucamonga Winery wines included Barbera made with 100% Barbera, which was considered among the best Barbera’s in California at the time. Also made were Zinfandel, Burgundy, Chianti, Grignolino, Claret, Barberone, Sauterne, Chablis, and Rhine Wine, Dry Muscat and Vermouth.

The Cucamonga Top Winery was operated by father and son team Joe Guidera and Joe Guidera Jr starting in 1941. The winery produced 200,000 gallons of wine annually and grew grapes on 400 acres of a vineyard owned by Mr. Guidera.  They used hydraulic methods to crush their wine in order to produce quality wine with the best flavor.  The winery employed six full time workers and often hired seasonal workers during harvest season

The fountain winery was founded in 1934 and opened in 1937 by Fontaine and Louise Coragliotti.  The couple started their winery on Fontaine's parents property after they married in 1930 and continued making wine even throughout prohibition.  In 1934, they purchased property in Ontario on Holt Boulevard, and built their winery.  Eventually, they purchased a vineyard in the area known as Bloomington today in order to have more grapes for wine production.  The wines that were produced until the winery's closure in 1970 included Claret, Sherry, Tokay, Light Muscat and Sweet Vermouth, just to name a few.

The Galleano Winery was founded by Domenico Galleano in 1927 in the Wineville area of the Cucamonga Valley.  Due to the horrendous serial killings that took place in Wineville, the name of the city was later changed to Mira Loma in 1930. Domenico, his wife Lucia and their children made wine in their basement and continued to do so throughout prohibition until their winery opened in 1930.  They expanded their vineyard to include Grenache, Zinfandel, Mourvedre and Mission grapes.  The winery is run today by grandson Donald Galleano, and his son Domenico Galleano, who one day will take over the business, despite the fact that it may be difficult to sustain vineyards due to all of the development taking place in the area.

Garrett and Company was a family owned and operated company founded by Dr. Frank Garrett in Medoc North Carolina in 1835 that produced wine for fifty years.  In 1911,  Garrett & Company expanded into California and acquired vineyards and a winery in the Cucamonga area. The company continued to flourish under his nephew, Paul Garrett's guidance as president and produced and marketed standard and high quality wines that were distributed nationally. After the death of Paul Garrett in 1940, Howard C. Paulsen became president and in 1945, Garrett and Company purchased the Italian Vineyard Company and the third generation of the family continued to run the winery.  Their featured brand of wine for medium priced wines was Garrett's and the higher priced labels were Paul Garrett and I.V.C.

The Padre Vineyard Company was owned by brothers Jimmy and Giovanni Vai, and located in the Cucamonga, California.  The winery's amenities included storage cellars, a fermenting room, a brandy distillery, champagne cellars, and fortifying rooms.  The original winery was founded in 1870, but was rebuilt in 1909 by the Vai family.  The winery produced table wines, desset wines, and sparkling wines. 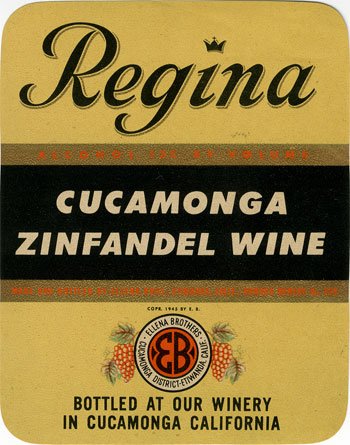 The Regina Winery, Operated by the Ellena Brothers, was located north of Cucamonga in  Etiwanda.  The winery was founded by Claudio Ellena of Australia, but continued to be operated by his sons Frank and John B. Ellena, who served as president and vice president.  Another brother, Louis Ellena served as a distiller while Arnold Ellena served as wine maker, secretary, and chemist.  The featured brand was Regina, which included sparkling wines, dessert wines and table wines.

The winery also had a wine vinegar plant and sold vinegar in their tasting rooms, was known for their distinctive wine bottles, and the presence of its' mini stallions.  The winery began to decline in 1973 and is now leased by the J. Filippi winery in Rancho Cucamonga.

The Thomas winery was originally founded by Don Tiburcio Tapia  in 1839.  After his untimely death, it was purchased by H.H. Thomas in 1918, and later purchased by  Joseph Filippi in 1967.  The winery was nearly destroyed in 1969 from the Cucamonga floods, which happened when the Cucamonga Creek broke out of its' channel.  Although the Thomas family has not owned the winery in years, it still holds the family's name.  The winery does not produce wine, but has been restored to look like the original building thanks to hard work put in by Filippi and his family, but only parts of the original adobe walls and redwood frame are still in tact.  Most of the winery's visitors were tourists, but those who did visit were able to choose from seventy wines or champagnes that were available for purchase.  As of 2011, the winery was owned by Legg Mason Real Estate Investors of Los Angeles, who completed a revitalization of the plaza area surrounding the winery.