This guide was created by Katrina Cossio, Archives Intern under the supervision of Alexis Adkins, Archivist in 2018.

The Beginnings of the W.K. Kellogg Arabian Horse Library 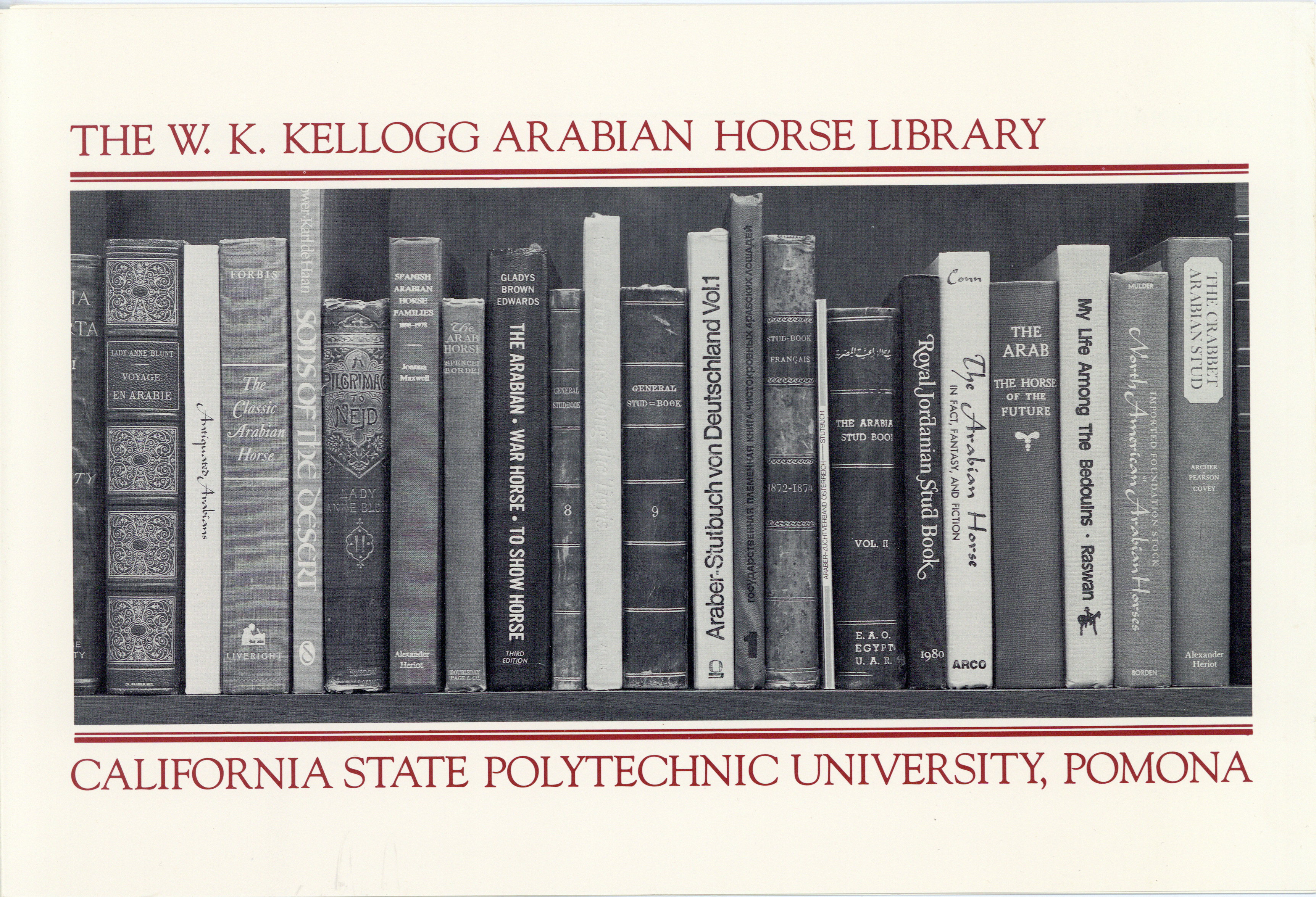 The W.K. Kellogg Arabian Horse Library (WKKAHL) is one of the world’s largest publicly available collection on the Arabian horse. The collection includes current, rare, and out-of-print materials including books, stud books, periodicals, audiovisual materials, and archival collections. The WKKAHL is a part of the Cal Poly Pomona University Library's Special Collections and Archives unit and is open to anyone interested in the Arabian horse.

Cal Poly Pomona is located on the site of cereal magnate W.K. Kellogg’s Arabian horse ranch. Kellogg built the ranch in 1925 in Pomona, California to fulfill his life-long dream of breeding outstanding Arabian horses. As part of his interest in the breed, Kellogg began to collect books and research materials on the Arabian horse. Kellogg donated the horses, ranch, and other property to the state of California in 1932. However, the records do not indicate what happened to Mr. Kellogg's books. However, books on the Arabian horse were a regular topic of correspondence between Kellogg and the custodians of the ranch between 1939-1948.

The ranch was operated by the University of California’s College of Agriculture from 1932 until 1943 when it was transferred to the War Department and became known as the Pomona Quartermaster Depot (Remount). The Remount was demobilized in 1949 and the land and horses transferred again to the state of California. The state decided to use the gift for the growing California State University system and the property was combined with the Voorhis Unit of Cal Poly in nearby San Dimas. The Voorhis Unit had been established in 1938 as the southern branch of California Polytechnic State University, San Luis Obispo. The two campuses were known as the Kellogg-Voorhis Unit until 1956, when the school had outgrown the Voorhis campus and all instruction was moved to the Kellogg campus. The Kellogg Unit formally separated from San Luis Obispo in 1966 and eventually became known as California State Polytechnic University, Pomona.

The first volumes of what was known as the Arabian horse collection were probably transferred from the Kellogg stables to the Voorhis campus library between 1938 (when the campus opened) and 1943 (when it closed due to World War II). The collection was moved back to the Kellogg Campus in 1956 when the new library opened. The materials were shelved in a glass case and allowed to circulate. Materials continued to be transferred from the stables to the library and by the 1970s it was decided that the collection would no longer circulate and should have more protective housing. A separate room was constructed on the main floor of the University Library in 1975. There were 70 volumes in the collection at the time.

In Search of a New Home

In the 1990s the WKKAHL was separated from the University Library, administered by University Advancement, and stored in the Bronco Student Center, building 35. The Bronco Student Center underwent seismic retrofitting, asbestos abatement, and other structural improvements in 2001 and the collection was moved into a room in the old Kellogg Stables, which by then had been converted into offices and renamed the University Union (building 26). Only about 10% of the collection was readily available due to staffing and space restrictions. 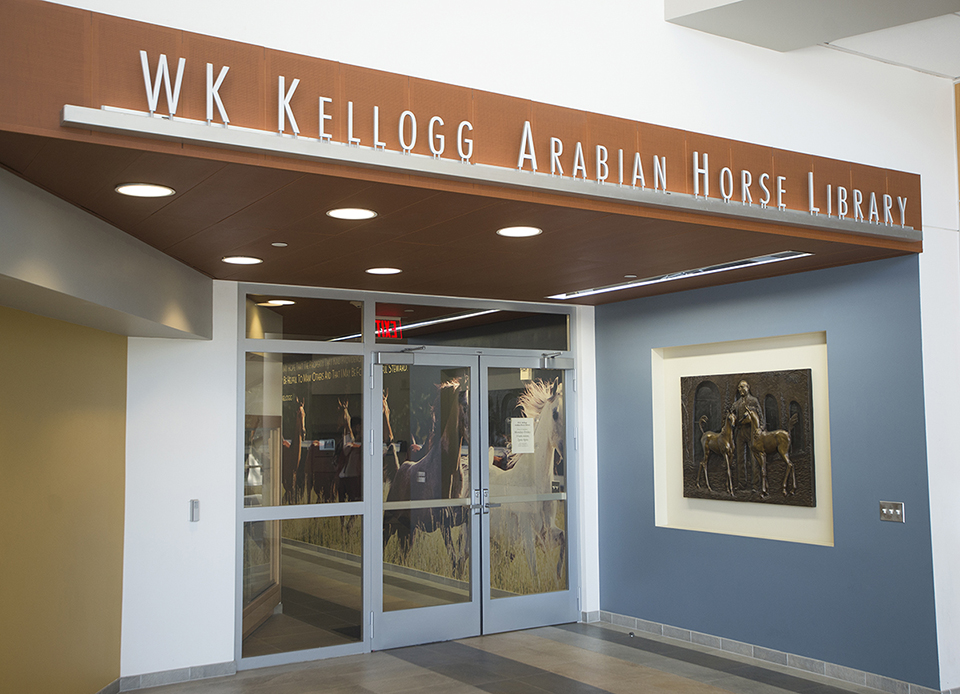 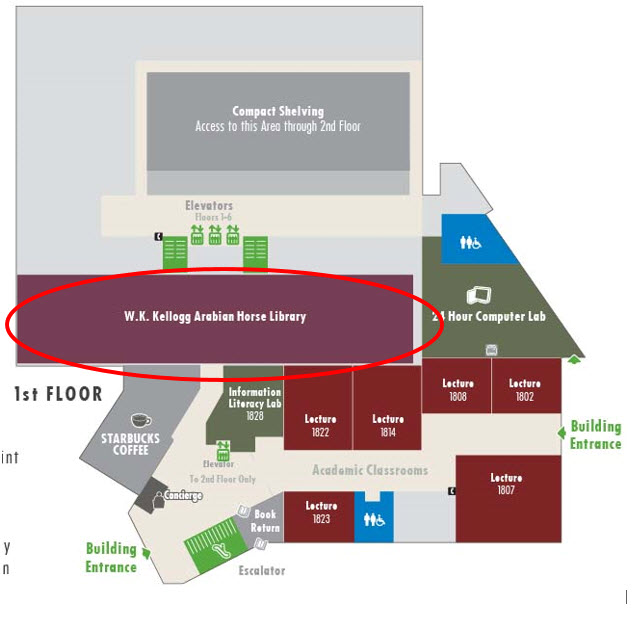 The W.K. Kellogg Arabian Horse Library is located on the

For more information or to schedule a tour or an appointment, please contact:

Check the University Library's hours for holiday and term closures.

Advance notice of your visit, although not required, is recommended in order to ensure availability of materials and staff assistance.